The Cottage and Cousins take 2

A continuation of our family vacation to Ohio....Since we were spending a week away from home, in an oooooold house, I was a little worried about Isla June getting into things.  Luckily, almost all of the outlets were up high, we could block off the stairs, and she was way to interested in her cousins to be too mischievous.  Unfortunately, the antique high chair had a really hard time containing the bug.  I had to sit her down in that thing over and over again.  craziness.
On a slow day.....not sure why, we loaded up the kids and headed over to Geneva-on-the-lake.  Yes, this town is as podunk as it sounds.  But, highlight of the area is the Adventure Zone!  It was fun to see Isla June (and all the rest of the cousins) running around having fun and just getting their energy out.
Isla June rode the merry go round with daddy.  and was a little unsure about the giant horse.  Not her thing.  I attempted a video, but it was just a blurry mess. 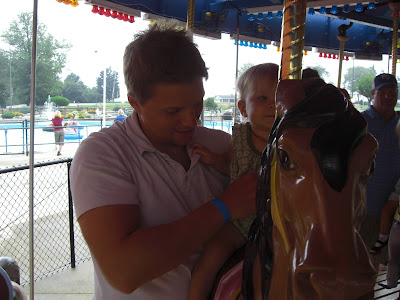 She kept crawling to get into the ball pit, so Jer let her cousin Aidan take her in.  She did not like it.  If I was a worse mother I would have a picture of her grasping for the ropes and screaming.  I refrained. and instead spent my energy fishing her out.  I was a little terrified that the balls were going to swallow her up.
How can you say no to this???  Jer doesn't understand my obsession with these things.


Isla June learned/can now stack her own block tower.  We have been doing this for a while for her as we love to play the "Godzilla" game and knock all of the blocks over.  I was so surprised to walk into the room and see her do it herself.

At Marina's Bridal Shower (she's marrying Jer's step-brother, Joel).  It was a beautiful day at the winery and her soon-to-be mother-in-law (with a little help from the rest of us) threw her the most exquisite shower.
Can I share one more crazy story?
On the first day at the cottage, Jer was so excited to swim with the kids that her ran into the lake.  And then realized that his wedding ring was gone.  He hired the boys and strapped on his own goggles and spent the next 20 minutes attempting to locate the thing, but the waves were getting too big.  Dejected, he confessed to me what had happened.  And being the low key wife that I am, I shrugged and said, "It was bound to happen."  The next day, we saw a guy with a metal detector and gave him a heads up about the ring, and he said he would keep an eye out for it; we heard nothing.  The next day (now 2 days post ring loosing) Jer went for a swim in the lake.  The lake was quiet, but not exactly glass like that day.  9 minutes later, he runs triumphantly up the stairs to announce that he had found his ring in waist deep water.  And that's my husband.
Posted by Meagan {Green Motherhood} at 8:44 AM