I have a confession...

I yelled at a child who wasn't mine.
But, let me explain myself....
Jeremy found a new place that he thought Isla June would like for fun daddy/daughter playtime called "Wee Jump".  It came recommended by someone that he works with (but if you want my professional review, it's not the cleanest place.  Cheap and fun, yes.  But clean....not really.  I was trying to be laid-back mom about this.)
Anywho, we were one of about 12 people who were there, so the place was not packed at all and every child had plenty of room to play and roam.
And daddy insisted on taking her into the bounce houses immediately ( he was a little excited as adults were allowed to accompany their children.....even though he was the only parent who chose to.)  I kind of knew that this would be a bad idea as Isla June is a child who does things on her own terms or doesn't do it at all.
so, yeah.  She decided the dark bounce house was no place for her.  And immediately screamed to be released.
Jeremy tried the more open bounce house hoping that it would be inviting and less intimidating.
But, the damage was done.  She did not want to be bounced around.
So, we headed over to the stable floor where the playhouses were.  And this made her happy.


I know what you're thinking....get back to me yelling at children I didn't spawn......
Ok...
2 little girls came over to play in the toy house (I say little, but they were probably 4 or 5 yrs old).  And they kind of told Isla June that she couldn't play with them....(yes, this really happened).  This is not when I yelled (promise).  I leaned over to Jeremy and said, "I hate it that at 16 months old, she is already having to deal with mean girls and their drama."  I mean, really.  Isla June wanted to play with them, but at this age, she couldn't play how they wanted her to (following rules/instructions is not her forte), but she is still a fun sweet girl (maybe this is in my eyes).
And I guess the other little girl got frustrated, and after telling my sweet little baby to "go away", she proceeded to hurl a large foam block, directly at my daughter's head.
And yeah, I lost it.  The teacher/momma bear in me came out.
I think I said something to the degree of, "HEY, I DON'T WANT TO SEE YOU THROWING ANYTHING AT ANYONE.  THAT'S ENOUGH!
and I was loud.  crazed mom loud.
I have to say that this was a bit of a teacher response.  It's kind of ingrained in me.  And because I didn't directly defend my daughter (I said anyone), I knew it was a classroom management response.
I mean, she's lucky I didn't drag her off to time-out (I kid....I kid....)
From a teacher perspective, I can see how it became a situation that the older girls were maybe a little frustrated that they couldn't play how they wanted to because Isla June was in their way.  But, from a mother's/teacher's perspective, they had the whole place to run around in and Isla June could only really play in the toddler area, so they should have found something else to do with their time.
But her parent wasn't around to offer this little piece of polite wisdom.
And this ballsy girl definitely needed someone on hand to give her some guidance.  I mean, it was pretty outrageous what she did with Jeremy and I sitting just two feet away. 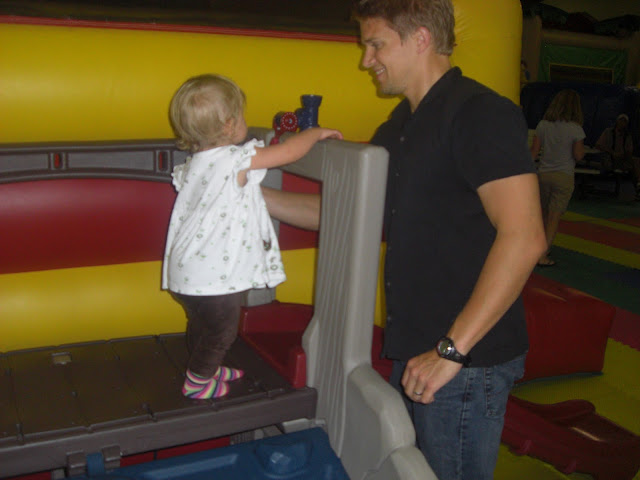 suffice it to say, we will not be back at Wee Jump.  Ever.
Posted by Meagan {Green Motherhood} at 7:43 AM