How to NOT Potty Train a toddler....

I've mentioned it and I've mentioned it, so now it's time for some 'splainin.  We actually, kind of, on accident attempted some strange sort of potty training.
Here's some background information:


So, on a random Sunday (because that's our movie watching day), I popped in the potty video.  Isla June seemed to like it and I was secretly hopeful that she would have this "aha!" moment and suddenly run into the bathroom, sit on her potty seat, do her business, and that would be that.  Well, let me be the big spoiler and let you know that it didn't happen.  Unfortunately, what DID happen is that Isla June refused to wear a diaper.  Screaming, hysterical fits telling me that she didn't want to wear a diaper. 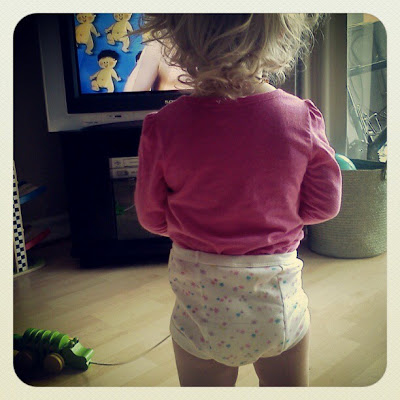 I was at a loss.  I've come to find out, this is very typical toddler behavior, we just hadn't encountered it yet.  At least, not to this level.  I didn't want to force her to wear a diaper if she didn't want to.  Maybe this was a window of opportunity?

Thankfully, the hubs was home so we came up with a game plan:  he was to roll up the rug (the only padded item in the house) and be on potty watch while I ran to Target for supplies (which consisted of Big Girl underwear, a potty seat and extra paper towels.)  I had this grand vision of having Isla June pick out her own big girl underwear to help get her excited about this milestone, but I couldn't take a bare-butted toddler into Target, now could I?  So, I did the best I could.  Honestly, she wasn't too excited about wearing the underwear either.  She just wanted to be naked. 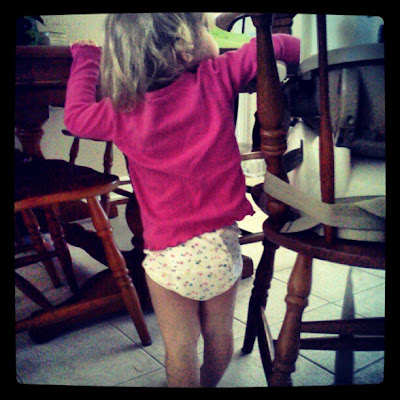 Now, the book said not to ask the child if she needs to go to the bathroom, but to instead remind the child to "tell me if you need to go potty".  Seriously?  I probably repeated that phrase a million times.  And Jer said it over half a million.  The book also mentioned lots and lots of praise for dry undies.  So, I did that.  I would check, she'd be dry, I'd be excited.  over and over again.

We did this for 5 days (and 5 big accidents).  The one thing that we did differently than the book, which most people would say was our downfall, was putting her back into a diaper for nap and bedtime.  There were some mornings where, despite me desperately trying to force fluids into her (which the book insists is important for training), Isla June was yet to have anything happen, potty-wise or accident-wise.  So I knew that my choice was to either put her in the crib in underwear, and clean up a disaster of a waterfall or just stick her back into a diaper so the poor girl could pee!  On a side note, she actually started protesting all of the drinks I was offering her....it's like she knew.

Also, the book's author suggested sleeping on the floor of your child's room and if you hear her stirring in the middle of the night to whisper out to her remember to tell me if you need to go potty!  ummmmmm, yeah, that was not going to happen. 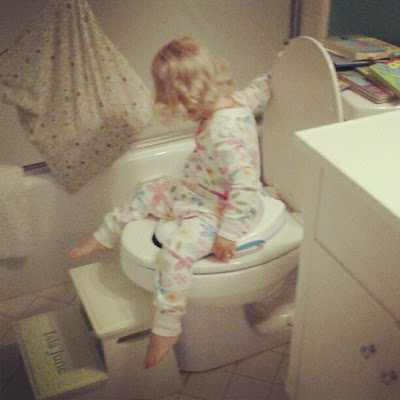 So, after 6 days of this back and forth.  I gave in.  She let me put a diaper on her, and I was relieved.  I wanted to leave the house again.  And she had watched way to many movies during this process.

Really?  I think she just wasn't ready.  I know the book's author would say differently, but I know my daughter and forcing her into something is never, ever going to be the answer; she's just going to dig her heals in even more.  I don't have the child who wants to please others.  This can be a double edged sword, but when it comes to potty training, it means that all of my excitement and cheers, claps and happy dances, stickers and treats mean nothing if she herself didn't have the idea in the first place.

Part of me was a little....discouraged?  I mean, I think my little girl can do anything.  So I was a little shocked that she couldn't do this.  But then, one of our friends told me that she was reluctantly potty trained at an older age (past 4) and she is brilliant.  Like advanced master's degree in some sort of really smart engineering brilliant.  So, yeah, that made me feel better. 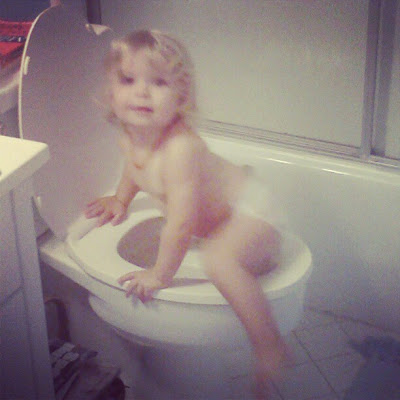 The good news:
We're getting there.  On her own time.
Advice is much welcome.
Posted by Meagan {Green Motherhood} at 3:42 PM