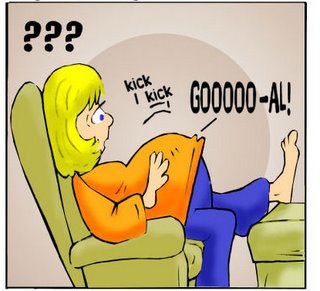 Official Milestone has been reached. Last night, sitting on the couch, Jeremy and I were in a lively discussion- not an argument, I was just passionate about what I was saying, and I felt, what I thought, was my dinner digesting. But, then it did it again, and again after that. So I stopped, mid sentence, and said "The baby's kicking me!" I got so excited, but I didn't move- I didn't want it to stop. Jeremy put his hand on my belly to feel the kicks, but he couldn't. Baby kicked a few more times while we were watching T.V., but calmed down when I went to bed.

I have to say, it was one of the coolest things. And all those mushy stuff that they say is true- I feel so much more connected to this little thing now that I can feel it inside of me.

Unfortunately, Baby Jenks woke up at 4 am and stared kicking again! I think he/she was hungry. This has actually happened the past three nights (me waking up at 4 am.) and now I think it's because my blood sugar drops at that time. So, I'm going to start keeping some juice by the bed. Hopefully this will help.
Posted by Meagan {Green Motherhood} at 9:26 AM