I spent some time the other day reading a blog post in reference to the discipline technique a family was implementing for their 17 month-old son.  And it involved spanking.
﻿﻿Once I delved into the comments-whew!  con-tro-ver-sy.  Heated debate.  Some people accused her of child abuse(which was laughable and quite offensive), while other's commended her strong stance on discipline.

And all of this back an forth got me thinking about discipline, opinions, and tackling this whole parenting thing in the first place. I think some parents turn to spanking because they feel like they don't have any other option.  Parenting is tough, and it doesn't really come as naturally as we thought- especially when it comes to discipline. Maybe other moms (and dads) struggle with this too.  By no means am I the behavioral expert-far from it.  But, spending 3 years in a special needs classroom sure did teach me a lot when it comes to behavior management and modifications (and the child development/psych degree didn't hurt either).

In my classroom, my advice for myself, and my assistants, was always, "What behavior am I reinforcing?"  Essentially, is the child getting more attention from me when they act out than when they are following the rules.  This might seem ridiculous, but think about it,


Kids learn to seek attention from an early age- and it doesn't matter if it is positive or negative to them- attention is attention!  I would try to make sure my students were getting 10x more positive attention over negative attention (I'm not making that up- it's some formula that says for every 1 negative you give a child, you need 10 positives to overcome it).  So, in the classroom, if I had to discipline a student, I made sure to give them plenty of positive time from me as well (play in centers, read books, take a special walk, help me set-up snack, etc).

I am a true believer in giving children attention for the behaviors that you WANT them to have, and implementing a type of "purposefully disregarding" for behaviors you don't want to see.  I know that this doesn't always work, but I believe it is a strong foundation for discipline.
But, with that being said, every child is different.  I definitely had to modify my discipline techniques for every student, some were more sensitive than others- a sideways glance could bring one to tears, while another would have me panting from his WWE wrestling moves.  Find what works. 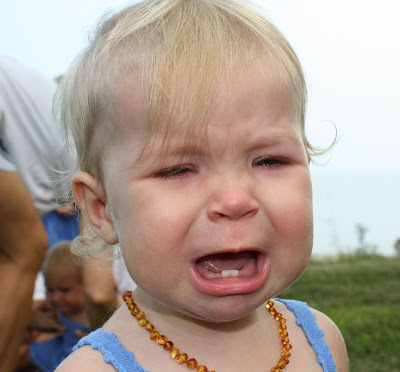 In our house, Isla June is definitely beginning the testing phase.  She has an opinion, but doesn't have the words to express it, thus causing a lot of toddler emotions and frustration.  But, we (attempt) to take it in stride.  For instance, diaper changes have become quite a battle (at times).  Instead of fussing at her, spanking her, etc., I keep a toy or a book nearby to distract her, we sing songs, and I enlist her help by having her hold the diaper.  And then I praise her for being such a great helper when we are done.
If for some reason all of the above tactics fail, and she attempts to flip herself over while riddled with poo, I'll just lean across her to keep her in place and wait for her to calm down( I'm not looking at her or saying anything).  When she does, I thank her for calming down, and we continue on with the diaper change.  And then I praise her for doing a good job.
Does it work every time??
No.
But, I'm hoping that she will start to understand that life is more fun when we are happy and agreeable, and you get mommy's attention.

My Child Development College Professor essentially provided this explanation of spanking in terms of discipline-spanking is different than a quick pop on the backside. Spanking is predetermined, forceful, intended to "make a point with pain", and could come minutes or hours after said indiscretion (ex. at the grocery store, you threaten child with a spanking for acting up).
A quick pop is intended to have said behavior to stop, immediately with a quick shock to the system. And said behavior falls under this category- an act that will maim, endanger or kill you (ex. running out into traffic).  He also said that if you were giving a pop every day, every week, even every month- it was too much.  Obviously the behavior modification (spanking) wasn't working.  Time to reevaluate.

We don't spank in our household.
But, to be honest, Isla June has received a "pop" one time.  When we moved into our new condo, we discovered that she was able to take the outlet covers out of the outlets and she was doing it at the babysitter's house as well.  It had become a sort of game to her.
There is an outlet right in the middle of the living room wall and is next to all of her toys (I can't really change this set-up, it's just how it is-there are outlets everywhere). So, after redirecting her multiple times, I realized that she was really testing this situation.  I'm a true believer in (safe) forms of natural consequences, but I wasn't willing to let this scenario teach her the natural way (through an electrical shock!)
So, because it was a dangerous scenario for her, she got a pop (see description above).  She had to stop this behavior immediately for her own safety.  I see it as a way to say, "hey, that's gonna hurt like this but 10,000 times worse!"
Did I feel bad? yes.  But I knew it was for her own protection to learn this lesson.

I know that I sound contradictory.  But we all have to find what works for us.   In all of her 14 months, I have used a physical form of redirection to attempt to save her life 1 time.  I'm ok with that.
By no means is this part (or will ever be a part) of our normal discipline routine.
With all that being said, here are little tricks that we use in our house that I hope will have a positive effect on Isla June's behavior (most of these I picked up in the classroom and are now ingrained in me):
All this rambling is to say...discipline is something I feel passionately about, but I am not an expert in this field!  I know that.
This is just what works for us.
right now.
It will change and we will have to adapt.
More than anything, my goal with discipline is to teach Isla June to be a polite, independent, self-controlled amazing little girl through love and positive, consistent reinforcement.
We are all doing the best we can.
Sometimes it helps to hear tips on how other moms are tackling this whole discipline thing.

Update:  A great book I reccomend on the matter is The No Cry Discipline Solution full of positive reinforcement techniques.
And, as always, Kate (Motley Mama) speaks much more eloquently about this topic.
Posted by Meagan {Green Motherhood} at 6:24 AM