Last week, my favorite blog, Young House Love, announced their 2nd "Pinterest Challenge"  and ya'll might know I love me some Pinterest and YHL.  I attempted to participate in their last challenge as I was opportunistically already making something I found on Pinterest to give as a gift to my brother-in law's fiance for her shower... but, I forgot to take pictures of the process and the final product.  Heck, I don't even know if she liked it.  So, sharing that with you (and the readers of YHL), was a bust.
But, this time, I was determined to participate!!  Even though our schedule was incredibly packed- my mother-in-law was in town, we had a Masquerade Ball to go to, and we would be out of town for 4 days packing up the contents of our entire house (more of those details to come).
So, with all of this in mind, and because of my sheer determination to actually make AND blog about something this time, I new I was going to have to find something relatively easy to make.  Honestly, most of what I have pinned on Pinterest is inspiration for the new house(and super easy/good recipes), and as we aren't in the new house just yet, most of my "pins" remain just that, Pins.  But, after scrolling through my boards, I came across this... Looks super simple and easy and if I pulled it off just right, it might not look like a crafty craft project.
So, at around 8 pm last night, I thought I'd get started.
I dug through the recycling to find my "vases", hoping for a wine bottle as I liked that shape more, but this is all we had...
To get the wrapping started, I decided my best bet was to tape the yarn onto the bottle (and all I had around was blue painter's tape. but it worked).
And then, I just (attempted) to start wrapping the yarn around the bottle into little tight rows.  But, that wasn't going so well, so I brainstormed a solution (a lazy one...didn't want to get up out of the recliner), 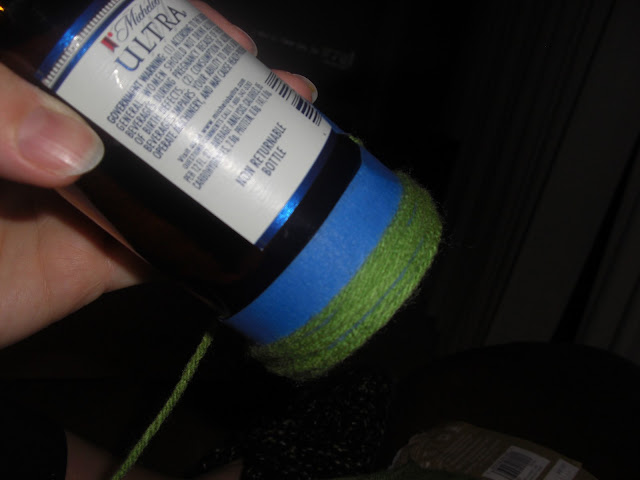 I used a piece of the blue painter's tape, with the sticky part out so that the yarn could stick to the bottom of the bottle without sliding off.  This totally worked, but I had to be diligent to make sure that the yarn stayed close and tight so that you couldn't see the tape.  And then, I just kept on wrapping, making sure to push the yarn down so that it was nice and tightly compacted (is that the best way to describe it?  not sure).
But then, I reached the neck.  and I came to a standstill.  The yarn kept slipping down.So, I pulled out my trusty "tape backwards trick". 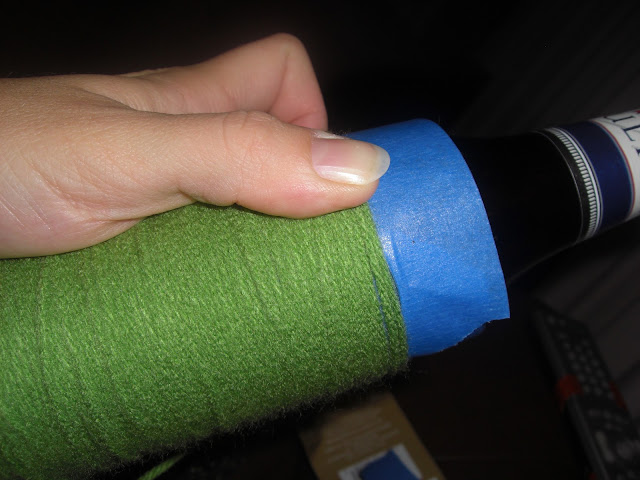 and again, it worked...until it didn't.  when the neck got real thin, the yarn just kept slipping, and the tape wouldn't stay put either.  So, (relegated to getting up off the couch), I found my handy glue gun. I really wasn't quite sure what I was going to do.  Gluing the string down wasn't the best option and I didn't really want to burn my fingers.  So, I just kind of ran the glue up and down the neck of the bottle in thin strips to make the surface have kind of a rough edge for the yarn to hold onto.  I don't have a picture of this, because I didn't know if it would actually work.  But then, it did, and it was too late to take a picture.  whoops.
After making it to the top of the bottle (with the glue gun method), I realized that my work looked a little rough in the areas that I got tripped up.  So, I decided to re wrap the entire bottle.  This was very easy to do now that I have the first layer of yarn already over top.
And just a little glue at the top and 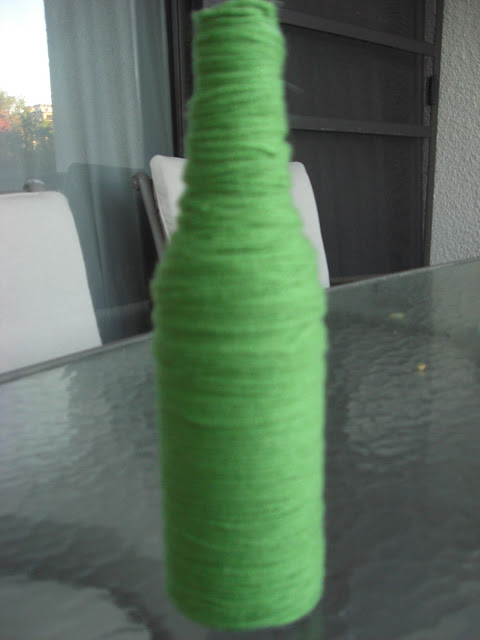 voila!  A crafty little bottle. (yes, it does look crafty. oh well.)
I wanted to make 3 of them, but it was already passed my bedtime by the time I was finished with just one. 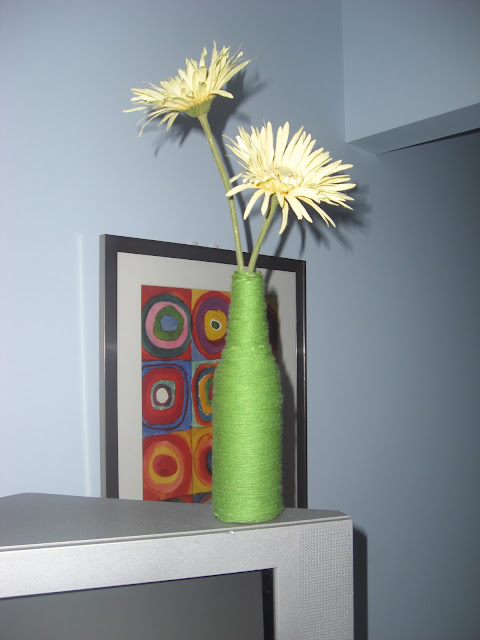 I chose green yarn because it's my favorite color!
So, that's it.  My craftiness exposed.  A pretty simple (and maybe a little cute) project. 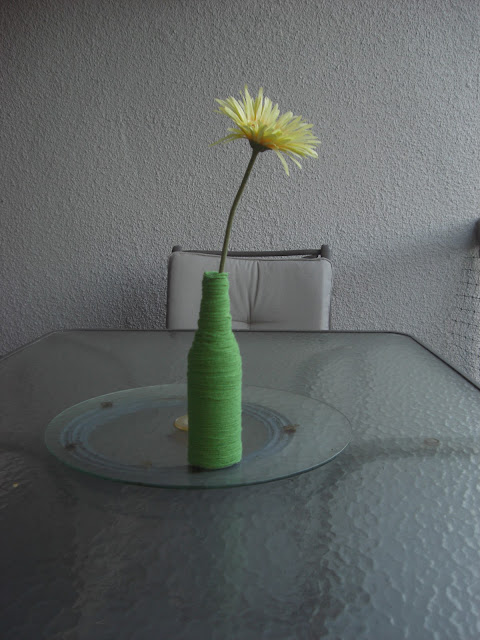 I think they would look really good if I had 3-5
of them for a centerpiece with different height flowers
Posted by Meagan {Green Motherhood} at 8:47 AM