On my 30 before 30 list I put "Learn How to Cook a Turkey" as number 15.  It wasn't the first thing that came to mind, but it also wasn't the last.
I guess I figured that I want to be able to host Thanksgiving or Christmas dinner for my family without having to rely on someone else to cook.  Not that I mind my stepfathers or mother in-law's cooking.  They do a great job.  But, they won't always be around.  I've got to learn to stand on my own two feet and make it happen.
Plus, I want to teach my children this invaluable skill.  I have the utmost respect for those who cook for their families.  It's a very encompassing project (at least it is for me!)

With no major turkey holiday between when I wrote my list and my birthday, I haven't really gotten the chance to try and attempt this feat.  But the other day, God heard my excuses thoughts and knew just the thing that would push me over the edge.  He took all of the packaged Organic Chicken out of the store.  Yes, I know it was Him.  And I had a good chuckle in the store at the Big Guy's sense of humor.
So, I threw two WHOLE Organic Chickens in my cart with the determination of a saint (because I had obviously been ordained by God to make this happen.  At least that was what I was telling myself.)

Little did I know how easy it was going to be.  I found THIS recipe.  Followed it to (mostly) a tee and said a little prayer over the bird, cranked up the heat and walked away. 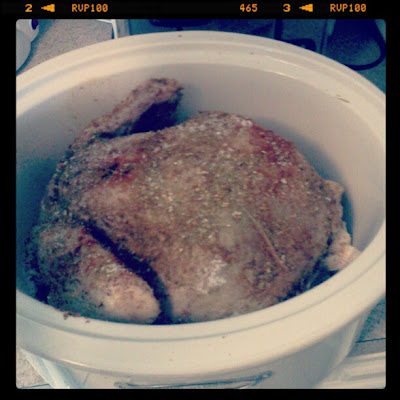 And don't you know, 5 hours later I had the most divine little chicken ever.  Both Isla June and I gobbled it up (Jeremy was out of town otherwise half this thing would have been gone that night!) 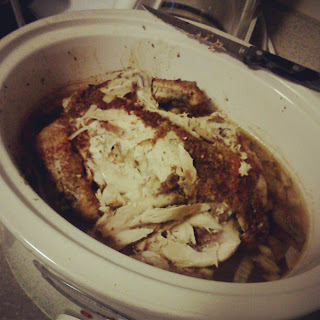 So now it's going to be a monthly staple.  It's too easy (and affordable) not to keep this up.
That's right, I am a bone-e-fide cook.