So, it finally happened. Isla June got sick. I guess I knew it was possible. But I was hoping, deep down, that I birthed the super baby who was going to be able to fight off anything. I mean, I know she is in dayschool, but I was hoping that between the breastfeeding, probiotics, vitamins and inheriting Jeremy's immune system that we would keep the sickness at bay. Maybe, I was also hoping this because I didn't know how I would handle it when/if she actually fell ill. But, on Saturday morning it happened.

Baby slept all night (like 7:00 pm to 6:45 am). And when she started to wake up, Jer ran upstairs to get her (he couldn't wait to see her), and immediately called out to me. Isla June started to cry and Jer was a little frazzled. I came in to see what was wrong and Jer proceeded to inform me that Isla June had thrown up. Now, I was assuming that she had JUST thrown up, which is why she cried, but I later found out that she had thrown up in the middle of the night and had been covered in vomit all night. (This made me feel TERRIBLE!) I mean, she didn't cry AT ALL the night before. She was fine when we went to bed (I always check on her), and she didn't make a sound all night. All I can say is, thank God for her monitor. Keeps an eye on her when we can't.
So, we got baby up, and she was really fussing at this point because she was hungry. So, even though she had thrown up, I knew I needed to feed her. She nursed pretty well for about 5 min. Afterwards we quickly jumped in the tub because she smelled awful (I had to hold my breath the whole time I was nursing her. I do not handle vomit smell very well.) Oh, and let me point out that I knew that this wasn't spit up because it had a green tint to it. Yuck. So, after bath time, Jer had her and was lotioning her up, and I guess he was moving her a little too much because she immediately started to projectile vomit everything she had just eaten onto our bed. Now, if you've never seen your baby (or any baby for that matter) vomit, I do not recommend it. It's a pretty terrifying situation. Exorcist style vomit coming out of my helpless little girl absolutely broke my heart. I think we cried together. I didn't even care that there was vomit all over our bed. I just wanted her to be ok. I popped back in the tub with her and hosed her off again, this time with explicit instructions for daddy to do very little movement. I got on the phone with Mimi and pretty much insisted that she head over for the day.
Isla June was very tired and pretty much fell asleep every time I just laid her in her crib. Mimi and Papa Kenny arrived quickly and took over for me so I could get to my hair appt. (I'm not a terrible and vain mother, I promise. I knew she was in good hands). Upon my return home, baby girl had been resting, eating, and starting to act like her normal self.
But then....around bath time, there was another incident. A small incident, but an incident nonetheless. So, daddy was holding baby while I got the tub ready and then all of a sudden, it was vomit time all over again. And it was a whole lot this time (see photo). Sweet daddy stood patiently while baby girl got sick 2 more times. He was trying to protect our new rug, so most of it went all over his clothes. At this time, I noticed a fever too (underarm temp of 100.5). Ahh! This is where I did freak out just a little bit. But, I realized that I just needed to give her some Tylenol.
We put baby girl to bed with prayers for a safe night sleep. She didn't sleep so well, but no more incidents have occurred. I'm hoping that this is just a little stomach bug and not something more serious. Being the guilty mom, I immediately worried if this was some kind of food borne illness from improperly preparing bottles or what. Let's hope not. 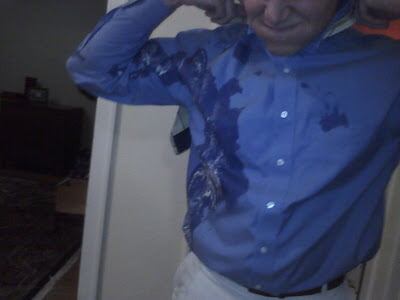 Posted by Meagan {Green Motherhood} at 7:00 AM