We're still attempting to incorporate more crafts and sensory activities into our weekly routine.  They definitely don't happen everyday (though, I wish they would. someday.)
While at Target the other week, I picked up some Non-toxic finger paint.  I've since found a recipe for making finger paint at home, but it involves food dye; I'm not sure if that will come off of the skin or not.  But, we may have to experiment with it.  For now, we have 4 tubes of paint to try out.

I decided the best place for this little project would probably be her high chair.  I mean, she can just paint away on her tray and then I can wash it off.  But, I didn't consider the fact that Isla June only associates food with this tray, so she had to taste the paint, first thing.

She quickly realized that it's gross.  But then she looked at me like I served her disgusting food.
So, I had to show her how to stick your hands in it and smear it around.  I was pretty surprised she didn't just jump right in on this, but I guess it's something new to get used to.

She actually requested the colors red and yellow.  She did NOT want blue.

And then she wanted green, but just a tiny bit.
I think it started to look like a heart.... 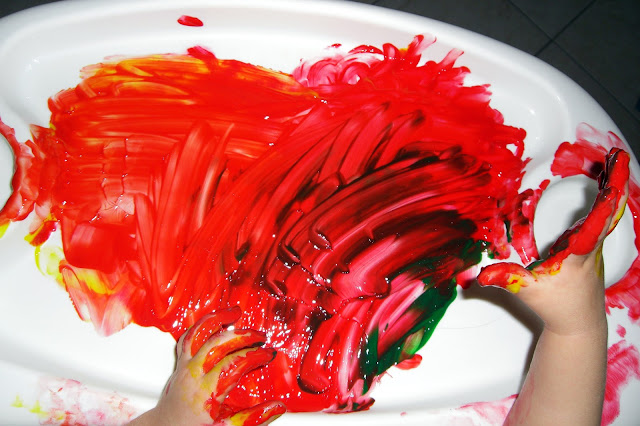 But, then she told me she was all done.
So, we made up a game with letters

I would write the letter, she would tell me what it was,

and then she could erase it.

We had a really good time with that. 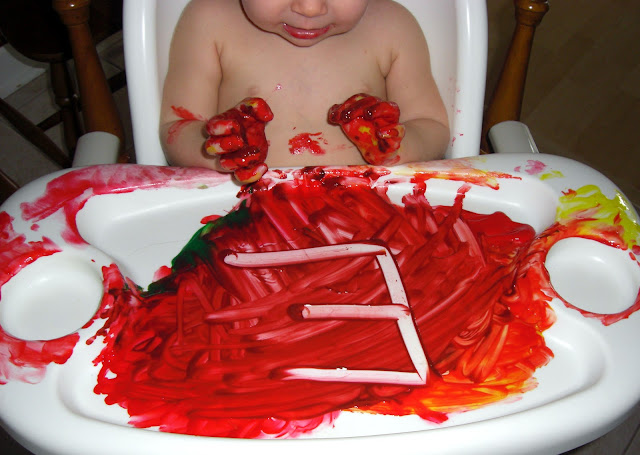 and then we started with shapes

It started to be a little bit more of a body paint activity than just a finger paint one.
That's to be expected, I guess.

And the, like that, she was done.
So, I told her to wait and we would get her cleaned up.
And I swear my back was only turned to the sink for one second.

But, I turned around and found this....

Posted by Meagan {Green Motherhood} at 6:57 AM